The evolution of the signature – from wax seal to e-Signature

Important documents are signed all the time: wills, contracts, government documents, the list is endless. The person’s signature identifies the signer, but also authorises the document by proving that they agreed to the terms stated. 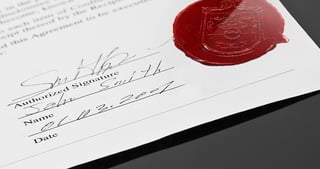 Signatures are extremely powerful items, which is why we have chosen to discuss some of history’s most important documents and how they were signed:

The traditional view of the signature, with ink and paper, is not how it has always been. One of England’s most important documents, the Magna Carta, was ‘signed’ with the King’s seal, as was typical of the time. The Oxford English Dictionary’s definition of ‘to sign’ is: “To put a seal upon (a letter or document) as a means of identification or authentication; to stamp with a seal or signet”. Seals were commonly used to authenticate documents and to prevent forgery of legal papers.

Despite being one of the most well-known figures in history, little is known of William Shakespeare. Only six of the great bard’s signatures have survived, with each one spelling his name differently and none spelling it ‘Shakespeare’ as is done today.

As there were no copyright laws in Elizabethan times, plays went through numerous edits and editions, some authorised and some unauthorised; and errors often crept in during the printing process. The plays we are familiar with are likely to be quite different to the original versions Shakespeare wrote.

The United States of America celebrates Independence Day on the 4th July, the day the Declaration of Independence was signed. But it wasn’t actually signed on this date; this is the day that congress adopted the declaration. The signing happened over several weeks, with many of the delegates signing later, most likely because it was difficult to get all 56 delegates together in one place. Maybe they could have benefited from SigningHub!?

Signed just before the release of their first single ‘Love Me Do’, the contract between The Beatles and their manager Brian Epstein signifies the beginning of the band’s success.

The contract recently sold for £365,000 at auction. As Sotheby’s specialist in English Literacy and Manuscripts, Dr Gabriel Heaton, stated: “Without this contract, and the relationship it represents, it seems inconceivable that the Beatles could have achieved all that they did". A signature is worth much more than the paper it is on as it signifies an agreement between two parties. In business, a contract is the start of a relationship and an important document to begin working together.

Signatures and their significance have evolved over the centuries. It is surprising that with all the technological advances, it is still common practice to sign with a pen. Despite this, digital signatures are steadily being adopted and offer many benefits over the traditional ink signature:

For business users, you can add flexibility, streamlined workflow and high-trust, strong encryption and lowered costs to the list of benefits. Discover more about the differences in digital signatures here.